In recent years, record-breaking wildfires in the western United States have posed a complex set of new challenges to incident managers. Not only have these fires been the largest in history but they have also created an enormous cost for states like Washington, Oregon, California and Arizona.  Many factors suggest that these fires are only growing larger and occuring at an unrelenting frequency; in fact, every year has been hotter, and each successive fire season has gotten bigger and lasted longer than the last.  Experts widely agree that we’ve entered into an era of apocalyptic “Mega Fires”.

A recent story on CNBC (October 3, 2020) illustrated this multifaceted problem and highlighted the fact that more innovation is needed to support forecasting, community warning, and mitigation of these Mega Fires. One thing that has become apparent in the last decade is that these fires have created an enormous strain on firefighting and other public safety resources in the face of inconsistent municipal budgets that do not account for the enormity and impact of these disasters. Tablet Command was featured in this CNBC story as a best-in-class software that is part of the solution to better and safer management of these historic fires.  Tablet Command provides the highest level of situational awareness available to first responders which in turn contributes to safer outcomes during these large-scale events.

Deeply Rooted in the Fire Service 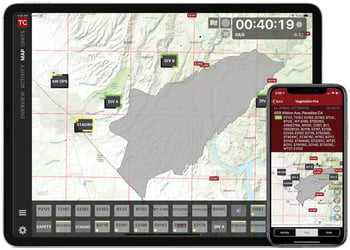 Tablet Command is an all-hazard incident command platform and data collection solution. The Co-founders and several members of the Tablet Command team have deep roots in the complex environment of the California fire service where wildfires are a common occurrence from late summer into early winter.

These frequent events require the response of multiple resources from multiple agencies.  Members of the California fire service have an inherent understanding of how to manage multiple resources from a variety of agencies in a very dynamic environment.  The Incident Command System (ICS) has its roots in California wildfire response since the 1970s and has been used as an emergency incident organizational structure around the world for a variety of agencies and events. This is one of the reasons that the Tablet Command interface is so recognizable and intuitive to Incident Commanders across North America.

Tablet Command is an ideal solution in the Wildland environment where the rapid initiation of the Incident Command System, the organization of resources, and accurate mapping are critical to the safe and effective management of the emergency.