Some incidents are just worse than others.

When a high-speed train leaves the rails or a tornado rips the roof off the school gym, first responders face the confusion of a complicated incident scene. How many dead? Who is alive? Which of the living needs our help first?

Incidents like these require a different sort of response.

Before we can start rescuing a single victim (as we might on a smaller incident), our first responsibility is triage, the act of sorting and prioritizing patients. The dead can wait; we need to find the savable living and make sure they are transported first.

MCIs are making the news more and more. We all know when we see them: the Oklahoma City bombings, the Paris Attacks, Nice, Brussels, Sandy Hook, Columbine, the Japan Earthquakes; and obviously 9/11.

Many first responders have ended their careers—and sadly their own lives—over these incidents. MCIs are also psychologically dangerous for first responders. At some point, the human brain and consciousness can’t contemplate or make sense of the amount of death and injuries that accompany large scale events. It can literally be soul crushing. 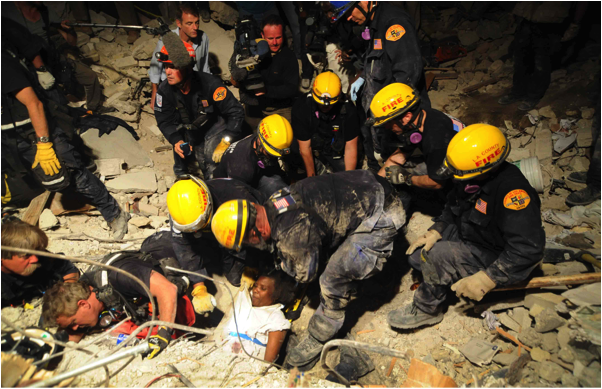 How to cope with these dangers?

Even the biggest incidents start with a single 911 call. Just like any other incident, we fire personnel receive an alert that includes description of the emergency. Big incidents often come with a sense of confusion or uncertainty. An active shooter, a broken levy, a terrorist strike; incident alerts like this don’t tell the whole story and we often don’t learn more until we arrive on scene and survey the situation.

Most importantly, we make sure that we don’t become victims ourselves. In a suspected act of terrorism, we have to ask if a secondary device is targeting us? After an earthquake, is the building we’re responding to stable?

Once the scene is secure, we begin to sort, categorize, and count victims. Not unlike the opening battle scene in “Saving Private Ryan”, first responders have about 30 seconds to roll through the scene and determine, dead or living, and then priority level for each living patient.

We use colored ribbons tied to patients to communicate their status to other responders: red tags need immediate extraction or intervention in the field, while yellow and green tags have a lower priority and stand a chance of surviving.

Black tags are used to signify the deceased.

These are the operational nuts and bolts of sorting dead from living during a multi-casualty incident. These efforts require clear communication and coordination. Colored tags work because they are extremely simple.

Simplicity is the key

Simplicity is the key to consistent success in professional emergency response. Like the colored tags, the Incident Command System has stood the test of time because it is simple.

Tablet Command was designed to make tracking these incidents as simple as tying tags. With MCI templates and checklists in Tablet Command, we can execute this gruesome task efficiently and safely, accounting for those civilians that have been terribly affected by horrible events and also tracking our people to ensure their safety too.