Two things happened last week in my life as a Fire Captain that simply could not have happened a generation ago.

The first was a technology fail. I sent a text message to one of the chiefs on a working fire, essentially yelling at him to “LOOK AT YOUR TABLET!”. I was off-duty and using Tablet Command to casually track radio traffic for a two-alarm structure fire in one of our busiest battalions.

Twice during this fire, the incident managers asked dispatch to read a list of responding first and second alarm units. It drove me nuts that so much radio bandwidth was getting burned up! 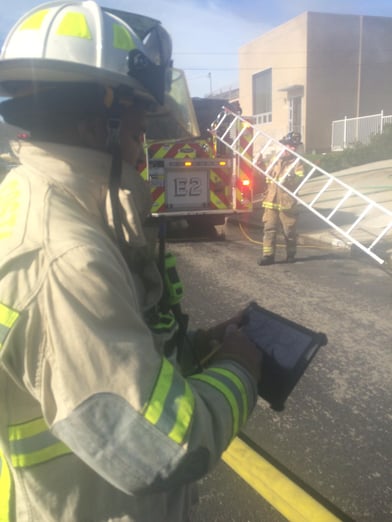 Tablet Command automatically gives the user their responding units to every call through CAD integration.  These guys could have just glanced at their tablets for that info and saved the radio bandwidth. And these units are really easy to see; there’s no digging- no drilling down.

Listening to dispatchers burn up more than a minute of radio traffic listing responding units drove me up the wall.

But then, a shift later and on an entirely different two-alarm fire—where I was assigned Safety Officer for an old school Battalion Chief—my faith was restored. This fire had some pretty critical factors in play: high heat, heavy fire, an unstable roof, etc. Seeing that I was working on a tablet, and knowing the capabilities of Tablet Command, he asked me: “Who do I have for first and second alarm units here!?”

He didn’t get on the radio! Technology WIN!

I’m not a Battalion Chief but I have been in the fire service for 18 years. I get it: incident commanders are overwhelmed and can only deal with so much. Managing structure fires can feel like juggling rattlesnakes and chainsaws, especially in the first few minutes of an incident.

True progress comes in baby steps.  Advances in technology need to respect the process of culture change especially in an industry with “150 years of tradition….”