On Monday, April 18, 2022 Tablet Command will release Tablet Command 3.2 to the App Store.  This is a major feature release and also includes minor bug fixes.  The new features include an extensive redesign of the Units View and Map View to unify the interface, adding a dedicated Command Area, redesigning the resource long press menu, redesigning the tap on resource pop over, adding Follow with Compass on the map views and much more.

The dedicated Command Area creates a minor incompatibility with older versions of Tablet Command so we strongly encourage users to upgrade all of their devices to 3.2 for consistency, stability, and access to all the great new features in this release.  See more details about this in the Units View section below.

Please carefully read these release notes to familiarize yourself with the new features.

Major changes have been made to the Map View to better support managing incidents on a map, and to mirror the user interface in the units view as much as possible.  The screen shots below show headings at the bottom of the map view that mirror the headings in the Units view.  You can easily drag groups and divisions out onto the map, add units to groups that have been placed on the map or into the proper columns at the bottom.  You can also drag a unit onto the map, and then drag another unit on top of the first one to create a group or division. 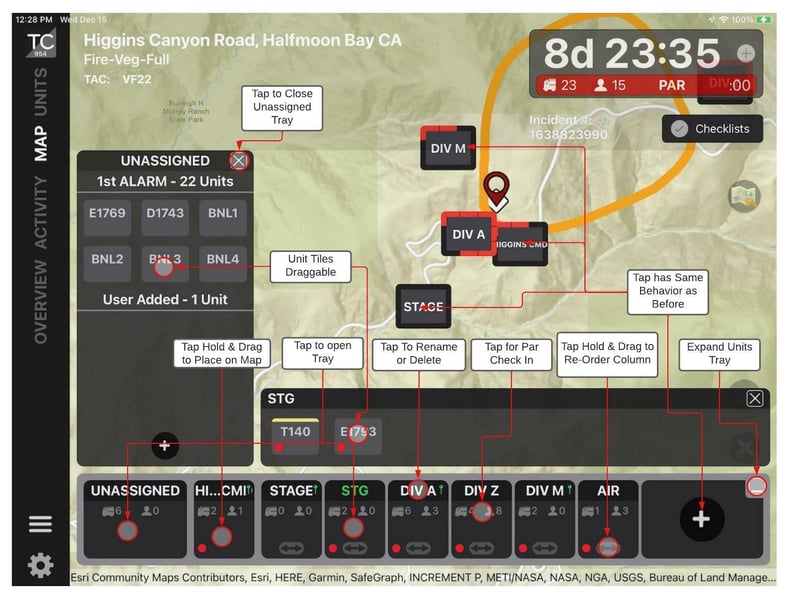 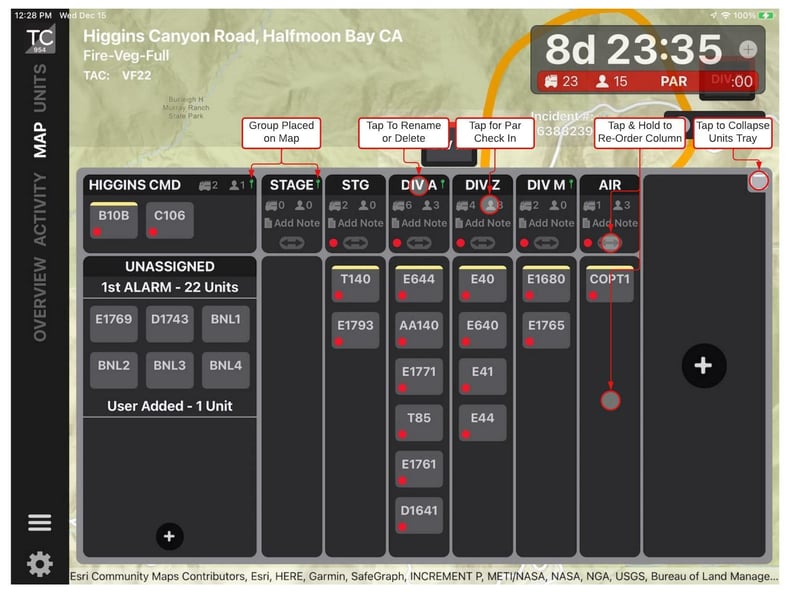 As mentioned, the Units View and the Map View interfaces have been unified.  We have also added a dedicated Command Area at the upper left which essentially replaces the "IC" column in most templates, and frees up screen space for more columns.  The Command Area shows three resources, and then can be scrolled if there are additional assignments.

We suggest that after you have upgraded all users to Tablet Command 3.2, that you edit your templates to remove the IC group as the Command Area makes it part of every managed incident.

Users running older versions of Tablet Command will see units in the Command Area as the first column in the Units and Map views, but if a pre Tablet Command 3.2 user manages an incident the Command Area will be blank for 3.2 users and they will see the typical IC column wherever the incident command has placed it.  Transfer of command between 3.2 and pre 3.2 users can create duplicate command columns, accountability is maintained, but this creates extra clutter and cleanup work for the incident commander. We strongly suggest upgrading all of your devices to Tablet Command 3.2 as soon as possible to avoid any inconsistencies or confusion. 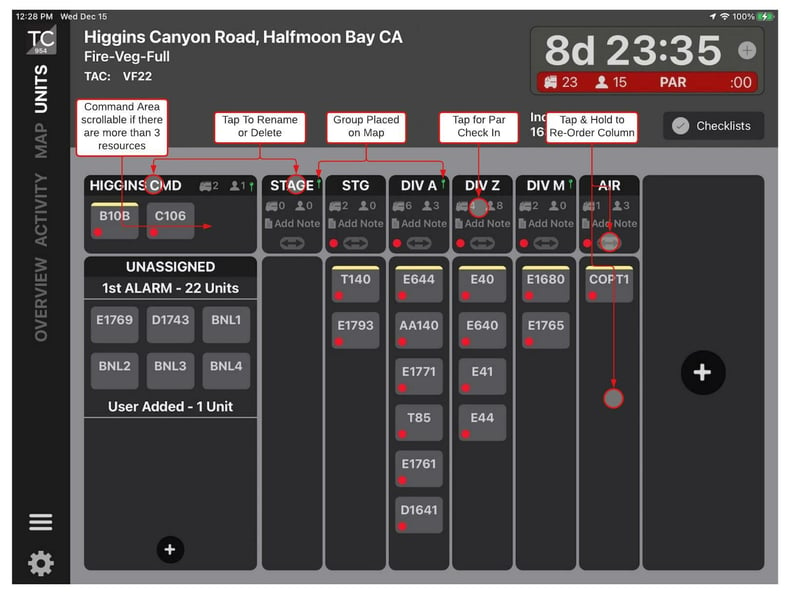 In order to better navigate and orient yourself on the incident map views, we have added Follow Me with Compass which sets the top of the map as your direction of travel.  This also makes it easier when operating on a large scene to orient yourself by pointing the iPad in the direction of a specific feature like a hill, peak, or intersection.  This feature is activated by tapping the arrow icon on the map twice.  The first tap activates the Follow Me feature, which centers the map on the iPad's location, and the second tap activates heading up, the Follow Me with Compass feature.

The long press circular action menu has been replaced with a new action menu that includes descriptions of all the actions to simplify the interface, and to mirror the pop up menu standard introduced in iOS 15.

The resource popover has been completely redesigned with added and simplified functionality in an expanded popover window. As you can seen in the video, you can set a resource into trouble, reset the work timer, change personnel count, add a task, perform par check in, check the resource history, and add and edit notes.

See the animation for visual representation of the features listed below:

This is a phased release over the next 15 days.  You can also update Tablet Command manually from the App Store to enjoy the new features after April 18th.  We again strongly encourage you to update all devices in your organization to 3.2 so users are not confused in any way.

Copyright Tablet Command Inc. 2023. All rights reserved. The written materials, tables and images contained on this website are copyright of Tablet Command, Inc., and may not be copied, used or reproduced without our express written permission.